Since 1979 Atlantic Fluid Tech has been manufacturing in Modena, Italy, hydraulic valves and components with high performance and quality standards.

Under the name of CHS, the company was founded in 1979 with the aim of manufacturing aluminium, steel and cast iron blocks, specifically meant for the hydraulic market, which was an emerging industry at the time.

In the ‘90s it specialized in production, assembly and testing of finished hydraulic valves and integrated circuits, designed by third parties. It soon proved to be one of the most qualified supplier in the field.

In  2008 Atlantic Fluid Tech was established with the mission of designing, developing and selling its own hydraulic valves and integrated blocks.

It’s 2011 when the two companies merged keeping the name of Atlantic Fluid Tech and a new industrial entity was formed to combine modern design with extensive production expertise. Its main strength turned out to be ad-hoc personalised engineering under specific customer’s request.

We manufacture in 6 production plants for an overall covered surface of 15,400 sqm: the two new AFT units which  have been equipped with the state-of-the-art production technologies and the four sister companies’ ones, specialized in heat treatment and thermal deburring, turning, production of cartridges and manifolds.

We produce in Emilia, a land of excellence in mechanics and with a long tradition in the hydraulic field. That’s why we can count on a local highly-qualified supplier chain.

Investments and innovation have always been, right from the beginning, essential factors in our corporate mission and this makes us one of the most dynamic manufacturers in the field.

We strongly believe in IT and Industry 4.0 principles applying advanced technology to company processes and manufcturing, as they can create new business models and improve general working conditions.

Thanks to our technical expertise and reliability, we count among our partners the leading world companies in several applications, like agriculture and service machines, earth moving machines, drilling and lifting equipment, industrial vehicles, industrial automation.

To stand by our customers and guarantee the best technical and logistic support, we have opened 6 branches in Japan, China, South Korea, France, United Kingdom, Holland and established a widespread distribution network in the United States, Australia and many other countries.

That’s why whent it comes to technical expertise, reliability and innovation, there’s no better partner in hydraulics than Atlantic Fluid Tech.

In the picture below, Christian Storci, Managing Director and Michele Storci, Financial Director. 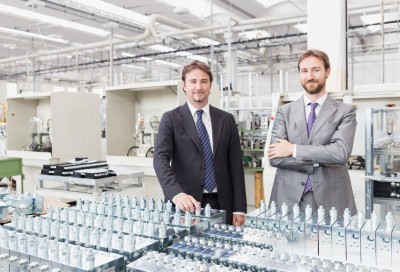